I took another little break, (well, not so little) from my blog. I just haven’t had much to say. We’re still, slowly but surely, working on our remodeling. My computer station is no longer where it was, or even as big as it was. Since we are going to be staying here longer than expected, we went ahead and bought a cheap used couch off Craig’s list. Previously, our seating amounted to Randy’s dad’s broken down recliner and the little rocker that came in the pod. We moved the entertainment center where my make-shift desk was. The new set up works a little better. Plus, it’s nice having a couch. There is still a hole in the roof/ceiling. Fortunately, there have not been any really big rainfalls. I’m really not sure how we’re going to fix it. When Randy got on the roof to pull out the stove pipe, I was inside and watched the ceiling move. So, it may end up being me up there on my belly. Who knows? If worse comes to worse, we’ve got a giant tarp that can cover front to back of the trailer. I bet that would look pretty! A bright blue tarp bungeed over the middle of the roof. Ha! Our neighbors would really love us then!

Speaking of neighbors... The one across the street is adding another metal building to his already oversized workshop. Yes, of course, we're envious. Anyway, he asked Randy to help him put up a couple of the windows. It gave us a chance to look at the structure up close. It was pretty cool. I've been looking at DIY metal buildings as a replacement for this old trailer for a while now. I'm even more excited about doing something like that after seeing this one as it goes up. I have a feeling we're going to be over there helping with the roof and siding, so it looks like we may be getting some hands on experience at constructing one of these things. It should be interesting.
Posted by Kim at 12:05 PM No comments: 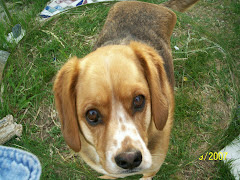