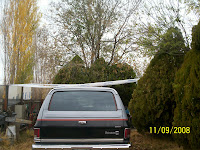 It's a crappy picture because the truck was in the way. We haven't moved it under the tarp yet. We've had a pretty good rain, and it went pretty well. No real wind yet. It's actually not a tarp. It's some leftover construction stuff that goes on the walls when they build houses. (from Randy's former life) He knows what it's really called, but he's at work right now. (I wish I had remembered we had it before we bought the big tarp.) It's got a bear leaning on a house. So, it's cute and obnoxious. I've gotten to where I enjoy annoying the neighbors. It's really not as obnoxious as the big blue one. And, you can't see the bears from the road, but the nosey next door neighbors can! Plus, it blocks their view. Now we can work without as much of an audience and with some protection from rain and snow. The hard part is going to be getting Randy out there to get the heads off. He just loves working on cars. I don't blame him. He'll be glad though, when it starts getting icy on the roads.
Posted by Kim at 8:42 AM